On June 23, 2013, the city of Inglewood lost a gifted educator and community icon.  Raymond D. Wilder, founder of Wilder’s Preparatory Academy Charter School in Inglewood, passed away on that day leaving behind a rich legacy.

Mr. Wilder was a man who lived to serve his community. He took pride in being a devoted husband of 54 years to his wife, Carolyn, and a doting father to his daughter, Ramona.

He was a drum major for justice through education, helping all those around him to achieve their dreams through a quality education. As a matter of fact, the Inglewood Business Opportunity Network (IBON), honored Mr. Wilder with their annual Martin Luther King “Drum Major for Justice” Award.

Born March 1, 1941 in Warren, Arkansas, he was reared by his grandparents after his mother’s death. He attended the University of Arkansas at Pine Buff and later moved to Los Angeles, where he continued his education at the University of Southern California. His professional career began at Teledyne Western Wire and Cable as Manager of Wire Processing. In 1967, he longed to do more, and started his own business, Wilder’s Seafood Center.

Living into Frederick Douglass' adage that “It is easier to build strong children than to repair broken men,” in 1983, Mr. Wilder and his wife Dr. Carolyn Wilder, founded a private pre-school, Tender Care Child Development Center.  Tender Care was far more than child care. The program offered a curriculum-based, developmental and fun approach to learning. It was specifically designed to prepare children for a complete educational experience prior to elementary school.

Raymond Wilder’s commitment to community service and education has been recognized by dozens of organizations and government agencies, locally and nationally.  His life inspired others to dream big.  It was his way of giving back to Inglewood, the community he loved. His legacy continues through the hard work of his wife, Dr. Wilder, daughter and current Wilder's CEO, Ramona Wilder, along with staff, students, and families in the Wilder’s Preparatory Academy Charter School community. 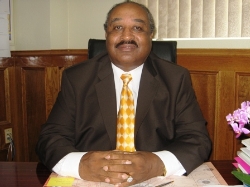